Grease up your fist Big Bertha 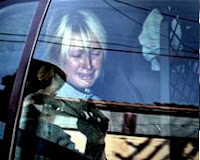 So the Judge won't let you be
or let you be free, so let me see
Nobody cares, how much you kick, cry , scream
Just like “The Simple Life” season three
So, get ready to dip, bum on your lips
Fuck that, cum on your lips, and some on your tits
And get ready, cause this shit's not about you Paris
You can’t turn to your Lawyer, Psychiatrist, Mom and Dad, Heiress
This is extortion, of biblical proportions
40 days and 40 nights with little meal portions?
How will I survive, in there they want me dead or alive?
Why, even these orange jumpsuits give me hives

I'd rather go down on my husband

Twenty percent of women would rather walk on hot coals, go to the dentist, or wear an orange jumpsuit, than wear a swimsuit. In fact, fifty percent of women have turned down invitations that required wearing a swimsuit, and 45 percent would never walk around the beach or pool without covering up first, according to the results of a body image survey published in the June 2007 issue of Fitness magazine.

Fitness, in partnership with Lands' End, polled 500 women, ages 18-49, to understand how women's behaviour, anxiety level, and self-confidence are affected when wearing a swimsuit. The results point to a discouraging trend of women so conscious about their shape and size that it affects the way they live and interact with friends, colleagues, and family.

Ladies let me put your worries to rest. Even if you have a little extra meat on the bone, or cottage cheese on the thighs, junk in the trunk as well as the back seat, or you are voluptuous, don’t worry. Men may think you’re fat but they’ll still fuck you anyway.

The huge hog that became known as "Monster Pig" was killed by an 11-year-old boy.

Jamison Stone shot the huge hog during what he and his father described as a three-hour chase. They said it was more than 1,000 pounds and 9 feet long; if anything, it looked even bigger in a now-famous photo of the hunter and the hunted.

Either way you look at it, that's a lot of friggin' bacon. And I'm sure you wouldn't see it in a swimsuit either?

Thanks for the story Bug.

Apparently cricket is the worlds second most popular sport behind soccer. In Brampton however it now rules the roost where there are a shortage of pitches to play on.

Only a few years ago Brampton had only 12 cricket teams. The number has since swelled to 74 teams, surpassing hockey and baseball as the dominate sport in the area.

Brampton also leads the way in the permeating aroma of curry powder and the number of mattresses on lawns.

This shit could sell

Also, Corn cultivation requires oodles of nitrogen, and the acreage of farmland devoted to corn in the U.S. this year has jumped dramatically. When the cost of production of a commodity and the demand for it rise at the same time, you've got trouble.

So now manufacturers, suppliers and users have turned to chicken shit, literally, to meet the demand. The poop in the coop has chickens working overtime and farmers banking on the industry.

Just let me know when you need my excrement? I’m already bagging it up and storing it in the shed just in case.

The days of hats, gloves and keeping covered up in your Sunday best must be long gone because there's a rash of brash dressing in Toronto -- and no doubt elsewhere across the country. Not surprising, given that "dressing up" for women often means a great pair of jeans, chic platforms and a glam top that flatters and camouflages any problem spots.

Church is the best place to meet chicks.....that and funerals.

A Toronto Pastor has issued two notices on 'Dressing for Church' in his Sunday bulletins, asking women to "dress in a 'modest' way -- a way that does not draw undue attention to your beauty or physique, so that you will not be upstaging God, who gave you these gifts."

Damn! God must be a real horndog, or at the very least a Sugar Daddy? You know GIGC thought I was a Sugar Daddy when she met me, but she soon found out I was just a low-cal saccharine man.

Strapless dresses, T-shirts and short skirts, oh my! How will people keep their eyes on their hymn books?

I don't know about that. Seems to me vivacious women would have me praying a lot more.....TO GET SOME! OH YEAH! I'm headed to the Corral tonight!

Cross posted at Mitchieville
Posted by Strange at 9:41 AM