I've been busy...does it show?

If you are a regular visitor to Strangedaze- all eleven of you- might have noticed through the week these pages have been a little sparse of content.

It's not that I have lost my passion to do this, although it may seem I have. It's just, there are only so many minutes you can squeeze out of a testicle in the course of the day.

Time is a commodity at the moment that everyone seems to be buying my shares.

I'm sure things will return to a normal pace over the next month or so and I'll be back to annoying you on a regular schedule.
Posted by Strange at 7:21 AM No comments:

You pets are on drugs #5 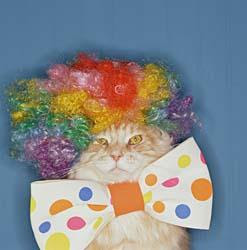 Posted by Strange at 8:08 AM No comments:

A busy week by the numbers

The 11 best cat puking videos on the internet.

The 55 most disturbing toys ever made.

You pets are on drugs #4 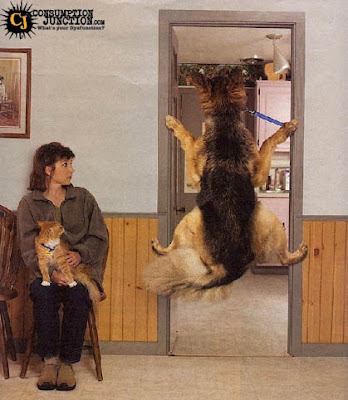 Posted by Strange at 7:58 AM No comments:

Again with the tips

Yup! That's right for those who are still having problems swallowing the motherload, here are more tips to help you reach the promised land.

Just put your tongue above the penis, and let it flow! - Anonymous, U. S.

I got this hint from my mother (of all people). She told me to control the "gag" reflex when trying to deep throat, squirt a little Chloraseptic in the back of your throat before going down on your man. I could never even come close to deep throating my guy till I tried this trick, but it worked fantastic! Not to say that it still wasn't a little uncomfortable, but the reaction from my man was more than enough for me. He was completely amazed. More than a year later, I don't need the Chloraseptic anymore and he thinks I am his own little sex star. - Kim, U. S.

Don't breathe through your nose when it is time to swallow... it cuts WAY down on the taste factor to make it palatable. - Anonymous, Gainesville

So this is Easter

And the dilemma is, should I post something Easter related or the worst robot sword fight ever filmed?

I barely tried swallowing because of one bad taste experience, but now I always have a glass with Coca Cola ready. After swallowing I drink some cola and it really helps getting rid of the aftertaste. - Joyce, Holland

I like to throw my head back as though I'm drinking a shot. - TD, Maryland

Blokes, swallow some yourself one day, that way you are showing that there really is nothing wrong with it. She may find it wrong to swallow but (let's face it) most guys are very uncomfortable with this taboo. She'll feel a little silly for wondering why she never did it. - M., London

If you deep throat you can barely taste it, not that it tastes bad. I rather enjoy the satisfaction of a job well done. - Anonymous, U. S.

Just close you eyes and swallow fast like your taking meds. - Anonymous, U.S.

Ten seconds of yuck doesn't equal ten minutes. Remember, men usually are up to their eyelashes in a woman's juices - so women shouldn't complain about a teaspoon! - Anonymous, Canada

If you don't like to swallow, just ask your boyfriend if it's OK if you have a drink next to the bed. You can come up with an excuse like, "Giving blowjobs makes my mouth dry," or just say you like to have a drink afterwards. You could also tell him the truth, but you'll never know how he's gonna take it (it might be insulting). When you have just swallowed, give him a smile and wait a few seconds before reaching over to your drink to get the sperm-taste out of your mouth. Hardly any man will notice. - Anonymous, Holland

I always found whenever I was receiving a blow job, my 'muff' got in the way, but I never thought anything of it until I was giving the nickname Muffy, my actual name being Murphy. I found that if I give myself a little trim down there, it appears to increase the size of your organ. And if your lover does swallow, she won't choke on anything. My girlfriend liked it a lot more as well. - Muffy, England

How else are you going to pass the time?

Posted by Strange at 1:42 PM No comments:

Do you know the Wicker Man?

Never one to miss an opportunity to post something from one of the funniest movies of all time....The Wicker Man....I will yet again appease you with Nick Cage and Beethoven's Fifth.

See more funny videos and funny pictures at CollegeHumor.
Posted by Strange at 1:45 PM No comments:

You pets are on drugs #3

Posted by Strange at 1:38 PM No comments:

The 10 funniest Freudian slips.
Posted by Strange at 2:29 PM No comments:

Last of the wood

It’s not uncommon to have an erection that curves to one side or the other. If yours does this, you’ll need to compensate accordingly. Use the bathroom walls to brace yourself as you balance on one foot and tilt your body until your curve is pointing down toward the toilet bowl. You might want to install a grab bar by the toilet if you do this regularly.

If you're a man of steel in the morning, you might as well be a superhero. Tie on the bedsheet for a cape, mount the bowl in a single bound, and make like you're flying. Hopefully the pressure relief will be like Kryptonite for your boner.
Posted by Strange at 2:25 PM No comments:

Labels: You need to know

You pets are on drugs #2

With a link to the evidence of course.

That is all.
Posted by Strange at 7:30 AM No comments:

Adding up the numbers

Before they were celebrities they made commercials. Here are 10 of the most embarrassing.

Before they were homeless....wait....that doesn't make any sense. Here are 50 of the funniest homeless signs. Not that there's really anything funny about being homeless, but what the hey.

After they were Rockstars they did some pretty crazy shit. Here are 10 of the craziest Rockstar sex stories ever told.
Posted by Strange at 7:22 AM No comments:

A woman successfully gives birth after several hours of labor. The doctor takes the baby and leaves the room to perform some tests. Several minutes later, the doctor returns with the baby in his arms and then suddenly begins to punch it, kick it, throw it about the room and slam it against an adjacent wall. The woman screams, "OH MY GOD WHAT ARE YOU DOING TO MY BABY?!" To which the doctor replies, "April Fool's! It was already dead!"
Posted by Strange at 7:19 AM No comments: