If you haven’t been following the new release Saturday, I’ll refresh your memory.

I’ve set aside this post, not only to recommend excellent additions to your music collection, but to make amends with sects of the population I may have offended in my posts during the course of the week.

It looked like I was going to get through the week without having to apologize to anyone, then Anna Nicole Smith kacked. Now, I have so much to choose from— religion, fat chicks, dead people, cross dressers, addicts- I’m not sure what I could post to cover everyone?... Thank you Anna Nicole!

Since I’ve already done the dead, did the addicts last week and I’m forever apologizing to the religious zealots anyway, I’ll try to kill as many birds with one stone, with no pun intended to the dead, animal activists, or the addicts.

As not to further offend, cross dressers, animal activists, the overweight, and the makers of stupid hats, this week I recommend: My Turtle's Dead! by Weela Gallez 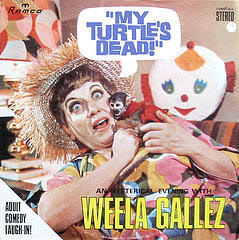