One little step for mankind

On such an auspicious occasion you would think I’d devote an entire week to bashing religion and all its zealots. However, if you know me, you know I don’t need a special platform to do that.

So, I will stick to my original plan and present Little People Week--- most of which I am loving ripping off from Matt over at Brohans--- where all the posts will revolve around little people.

I am obviously not a midget (Haha, could you imagine a midget and his stubby little fingers trying to type on a keyboard?), so I can’t really speak about the validity of that comparison, but I know that there’s one important distinction between those two groups of people in my mind at least - black people can hurt me, midgets cannot. (No midgets can hurt me, not even black midgets. To illustrate my point, I’ve included a handy color-coded Venn diagram which I created in just under 3 hours.) 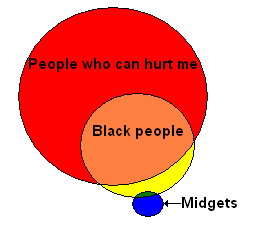 Now that we’ve established that I can use the word “midget” with impunity, let’s get right down to it. You'll need to brush up on your midgetology before we can go any further. The following links are suggested for just such a purpose. The A, B, C's of midgetdom. Check them out and I'll see you tomorrow.
Posted by Strange at 8:30 AM