Battle of the bulge

Pursuant to last week's sex survey post, I came across this gem. It will better enable me to entice the female of the species into having sex with me. Wow! I'm really going to score.

Now, to you, I pass along the words of wisdom on how to achieve maximum bulge.

Made of: A tube sock full of stainless steel beads, topped with a pair of golf balls.

Ideal for: Solemn occasions, like giving the eulogy at a friend's funeral. The Steely Dan is high on bulk but low on rigidity and protrusion, projecting a calm, stable energy over the mourners without giving the awkward appearance that you're experiencing sexual arousal at the thought of their loved one's death.

Make sure to: Avoid rupture of the sock and spillage of the beads. Always double-sock this one. 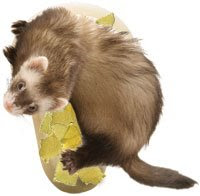 Made of: An athletic supporter coated on the outside with double-sided tape. Then, before leaving the house, attach a live ferret.

Added advantage: the furious squeaking and hissing make this the only crotch bulge on the list that can be heard over the phone. "What's that sound? It's my bulge, asshole."

Make sure to: Not wear this on a date. Ferrets have a horrible odor that would be unacceptable for a groin anywhere. Except Europe.

Made of: One live lobster, you can choose the size according to the occasion. Simply rub some raw fish on your scrotum and let the lobster grab on with his pincers. Mistaking your testes for prey, he'll hang on for 12 to 16 hours.

Ideal for: Sympathy. This bulge is the opposite to the BeastMaster. The excruciating pain of lobster claws on your manhood will twist your face into a continual mask of tragedy. Expect steady tears.

This one is perfect for apologies or bitch-out sessions with the boss. One look at you wincing and biting your lip and hearing you quietly begging God to let you die, and they'll know you're sorry. Al Capone said it best: "Beastmaster for doing the crime, Cock Lobster for doing the trial."

Make sure to: Keep an eye out. The smell of lobster can attract a host of predators, from raccoons to sea gulls to bears.

Made of: A bottle of Cristal champagne, fitted into a leather Louis Vuitton adjustable crotch bottle harness.

Ideal for: Any time you're in the line of sight of females, my friend. The ultimate symbol of wealth and virility, this bulge can be seen from 100 feet away if worn with the right pants. Also, positioned perpendicular to the groin, this foot-long protrusion is ideal for people who dislikes hugs.

All right this is the one I'm going with!

Make sure to: Avoid breakage. Not recommended for contact sports.


#5 The Commander in Chief

Made of: A deflated football, partially filled with warm clam chowder.

Ideal for: Just ask its inventor, one John F. Kennedy.

That's right, folks, this is The Bulge That Changed History. When Kennedy faced Nixon in the first televised debates of 1960, the audience who heard the debate on radio declared Nixon the winner. Those who saw it on TV, however, overwhelmingly went Kennedy. Why?

Because Kennedy was packing The Commander In Chief, broadcasting his distended groin into the zeitgeist of the free world once and for all. The people heard Nixon talk tough on Communism. They saw Kennedy had five pounds of dong.

Look around and you'll see "The Commander" is making a comeback in a huge way. In a nation longing for change, growing fearful of terror just as JFK's America lived under the looming Soviet shadow, this bulge's time has come once again.

In your own life, this classic is ideal for first impressions, such as job interviews or meeting the parents of your future bride for the first time. Good heft and volume, yet comfortable and form-fitting. A natural look that speaks of quiet authority.

Make sure to: Avoid leakage. Just ask George W. Bush, who planned to unleash his "Commander" in 2003 after landing aboard an aircraft carrier. Unfortunately, the G-forces from the flight ruptured the football, spilling most of the chowder down his thighs. When he stepped off the plane he unveiled to a shocked nation a bulge not even a quarter of the size he planned: 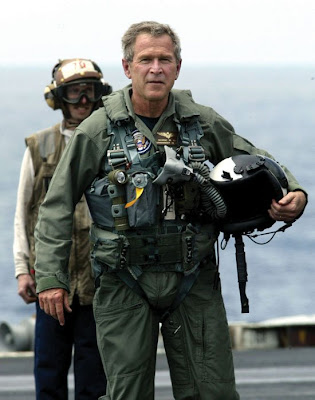 I just made you look at George W's crotch!
Posted by Strange at 8:38 AM