And you thought last week was bad

Pig on the lam

Maine's Colby College is having trouble nabbing a pig that's been on the lam on campus for a week.

Spokesman Steve Collins said the "free-range pig" is believed to be a Vietnamese potbellied pig, a type that's become popular as pets.

Collins said the pig has been on the lam since it slipped its leash during a campus cookout. The pig, it should be noted, was not on the menu.

Next week Lamb is a real pig.


What can brown do for you?

A shipment of marijuana from California led to the arrest of a man on drug and gun charges yesterday after he accepted a package at his doorstep from an undercover officer disguised as a UPS delivery person.

Members of the police street narcotics enforcement unit seized a 9 mm Ruger handgun and ammunition kept in a bedroom closet safe after searching the man's home.

I tried that once with Asian hookers....same story.


Bubbling up and over 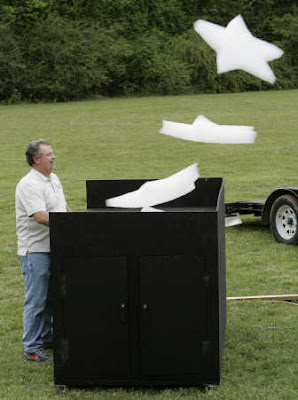 Picture the Manhattan skyline filled with Nike swooshes. Or the golden arches of McDonald's gently drifting over Los Angeles.

A special-effects entrepreneur from Alabama has come up with a way to fill the sky with foamy clouds as big as 4 feet across and shaped like corporate logos – Flogos, as he calls them.

Francisco Guerra, who's also a former magician, developed a machine that produces tiny bubbles filled with air and a little helium. It forms the foam into shapes and pumps them into the sky.

The Walt Disney Co. will use one of the machines next month to send clouds shaped like Mickey Mouse heads into the air at Walt Disney World in Orlando, Fla., Guerra said.

Sounds like a nightmare I had recently. No wait! Those were Hillary Clinton floating heads.

The latest hiccup for the coffee giant came this week when a downtown Toronto businesswoman said she was scolded by an employee at the King and Victoria Sts. franchise for buying a homeless woman breakfast.

Teresa Lee reportedly saw the pregnant woman being shooed away from a King St. grate by a police officer before offering to buy her breakfast Wednesday morning.

Once inside, the investment manager was reportedly reamed out by an employee for allowing the woman to eat inside.

After two public relations nightmares in as many weeks, Tim Hortons says it has no plans to change the way it does business.

However, they will be introducing the new Extra Large "Fuck You" Ice Cap for drive thru customers. Can I get butterscotch dribble on that?

Cross posted on Mitchieville
Posted by Strange at 8:35 AM